On the Sunday I decided to have a go at Brown Willy up on Bodmin Moor.  Initially I planned to tackle it from the South following G4OBKs 2015 route.  I plugged the postcode into the satnav and set off to find the parking spot.  As soon as I got away from the coast and gained some height around St Austel I was into thick fog.  Approaching the parking spot from the South West the postcode I had took me along the A30, straight past the planned start and onto the next turning beyond.

As this was beyond the edge of my map I struggled to find the correct parking and start but eventually found what I thought must be it.  I parked the car and prepared to kit up for the days walk but immediately realised that I had forgotten to load my walking boots. Doh.. 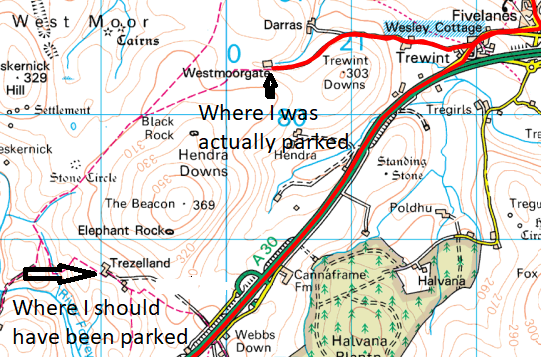 I set off anyway in my trainers but pretty soon realised things were not right.  Fortunately I soon came across a path closure notice with a location map and from this I worked out that I was definitely in the wrong place.  At this point I got the message that this was not to be so turned around and headed back to the car.  Fortunately I had also brought maps and a postcode for the Northerly approach as an alternative option so I plugged this into the satnav which said it was only about five miles away, I decided having got this far I may as well at least have a look at it. Shortly after I started driving the satnav changed it’s mind and told me it was actually about 20 miles away.  Ah well, at least the scenery would be pleasant if only the fog would lift! 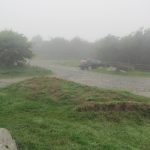 Parking on the Northern approach is great.  There is a proper car park with room for about 50 cars located at SX 138 819.  From here there is a good track for a little way and on a clear day I think it would be possible to follow the track all the way to the summit, but with the thick fog I was unable to see where the track led at each twist and turn and as the track is not marked on the map I was forced to navigate by compass alone. 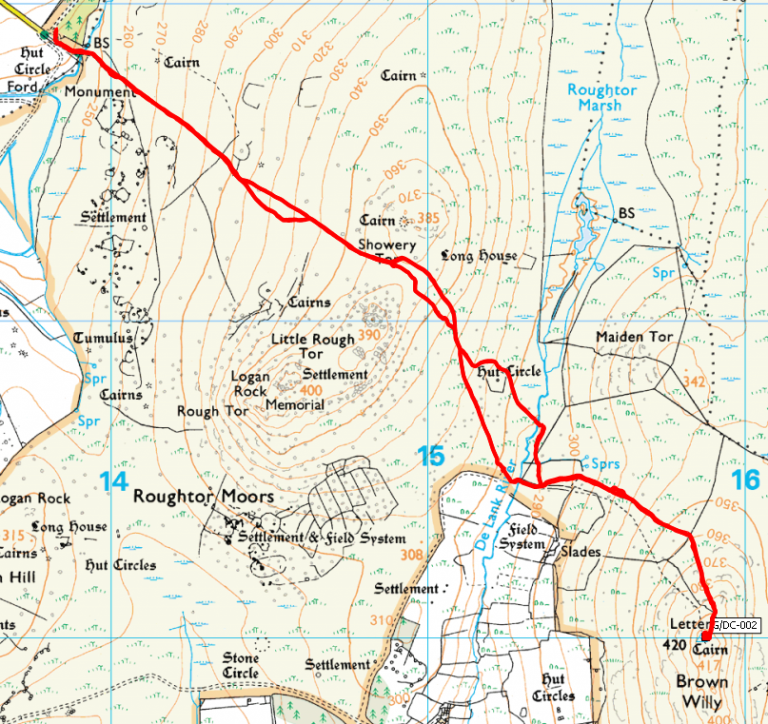 I took a fairly straight line towards the summit which was a mistake.  Reaching the river at SX 153 806 it was easy enough to cross but the ground on the other side is very difficult.  There is a proper crossing a little to the South which is what I should have headed for.  From that crossing there is a good path up to the summit which I followed on the way back down. 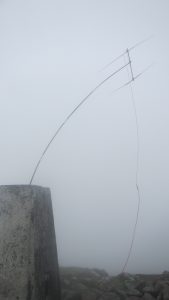 Reaching the summit eventually, still in thick fog, the wind was strong over the summit making setup difficult.  The aerial ended up pointing down under more than to the North East where I wanted it.

It took me a while to get the contacts, radio amateurs are sparse down in these parts, but I did eventually get the four I needed before packing up and returning to the car. On the return journey I followed the track down to the river crossing and managed to pick out the path back to the car park in the fog, a much easier route than the one I came in on.

It’s when you have a day like this that the planning and preparation pays off, and being willing to say no and turn back shows it’s importance.  The hill will still be there for another attempt on another day, make sure you are as well.  Be safe! 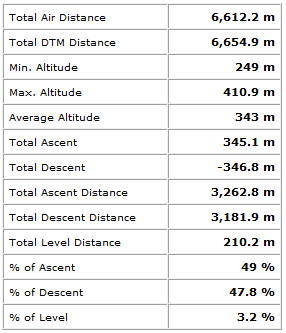