If you’ve ever before done a sota summit activation then this will not be the easiest, and if you haven’t done one before then this one will probably put you off ever doing another.

There is a track up to the top where there are a couple of masts and a reservoir but unfortunately it is private and inaccessible behind a high fence and locked gates, so put away any thoughts of gaining access this way.  Indeed there is no clear publicly accessible route to the top at all, the only option being via the marked access land that surrounds the summit.

Parking is not easy either, the road that passes to the south west is narrow and surprisingly busy. There are a few passing places but don’t be tempted to park in these or you will make yourself very unpopular, and it should not need mentioning that field gateways must not be used. There are a few spaces in a small cul-de-sac just as you come into the village of Penmarth which is to the south east of Carrnmenellis.

There is a footpath marked on the map running parallel to the road that looks like an option but it is not worth it. The path is not marked and is terribly overgrown. It is quicker and easier to walk up the road back to Channel View Farm where you can join the track up to the north east that leads towards the summit. Follow the track until you reach the locked gates which are just past where the track turns to the north west. At this point you will have to head off to the left of the track onto the access land. This is very bad. The ground is rocky but thickly covered with gorse, brambles and long grass which will all grab at you and trip you and if it has rained any time in the last few months it will also soak you. If this doesn’t put you off you will probably twist your ankle when you put it down between a couple of big but unseen boulders, The brambles are at best knee high and at worst past waist height. It’s like this all the way to the top now. Navigation is easy enough, just follow the line of the fence until you come to the sharp right turn at the top. By now you should easily see the radio tower and the trig point in even the poorest of visibility. The last twenty yards to the trig point are a welcome relief being merely broken rock without the thick brambles.

On the day I was there towards the end of October the weather had closed in so I was in thick cloud with visibility of about thirty feet. From the trig point I could see the radio mast , but only just.

I set up my mast and added the antenna on  top, then realised that I had forgotten to bring the power regulator for the amp. I had carried the amp and the batteries up for nothing. Never mind, I would just have to operate with the five watts direct from the radio. I put out a call, “CQ sota, CQ sota”, and was almost immediately rewarded by a response from G8NXD booming in at 5/9. It turned out that he was only a couple of miles away in Four Lanes. Unfortunately that was my only contact I made for this summit so I was not able to claim the point.  I called CQ for about fifteen minutes with no response so stopped then for lunch. After lunch I gave it another ten minutes, I could hear someone faintly to the north on S19 but couldn’t break in so eventually I packed up and headed back to the car.  On the return trip I took the easier option and followed the track back to the road to return along this rather than bashing through the undergrowth on the marked footpath.

Overall it was an interesting activation, memorable for it’s difficulties rather than it’s success.  If you are in the area then have a go at it but be warned, it will not be easy. 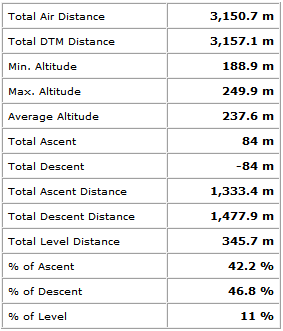