Sunday dawned wet and wild.  By the time we arrived at the National Trust car park it was tipping down.  Suddenly realising that we needed cash for the parking we searched our pockets and managed to find the six pounds required.  Checking the machine though it was out of order so panic over.

Ordinarily this is a fairly mundane climb, the main hazard being the tourists gasping for breath beside the path, but today was different, the path was deserted.

The Lingmell Gill crossing below Brown Tongue was interesting, there had been a lot of rain in the last few days and it was very swollen, but with care still passable. 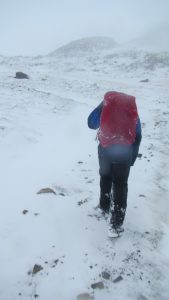 We met the snow line  at about 300m just above the Gill crossing.  The rain turned to heavy white snow, settling well and at times hiding the path completely.  We lost it through the Stones and had to get the map and compass out.  Wasn’t expecting to have to do that on Scafell Pike.

Around here we passed a couple of groups on their way back down who were the only ones we saw on the mountain that day.  None of them had summited as conditions were too bad higher up.

By 750m the snow was significant and the wind gathering force.  We found a little shelter behind a rock where we stopped to add another layer.  I think that’s the first time I have ever had to do that on the way up!

The final push up to the summit was challenging, at times breaking ground through snow up to our thighs.  On steep uphill ground this really takes it’s toll but Peter took the challenge and heroically forged the path through.  We were certainly glad though when the summit cairn finally appeared out of the gloom.

On the lee side of the cairn the wind had left us a nice clear gap to sit in where we settled down to set up the station.  I put my radio above me up on top of the cairn for a better take off, but was rewarded half way through the activation when it landed on my head, blown off by the wind.  No damage done though and I was soon back on the air. 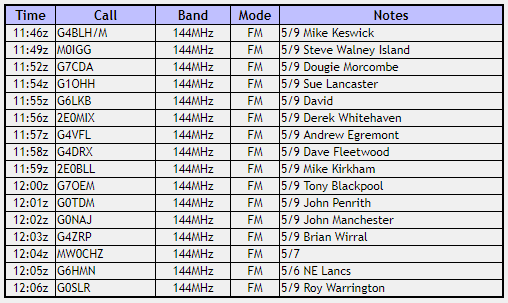 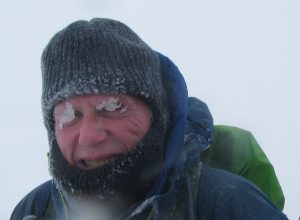 Conditions were good and I soon had sixteen contacts in the log, although by the time I finished I had lost all feeling in my fingers.  Looking up from the radio I was surprised by how bad the visibility had become.  It was total whiteout, then one of the others pointed out my eyebrows.

Once I had broken my eyes free of the ice we hastily packed up and headed back down.  By this time all three of us well chilled.  The decent was quick, at times plunging into waist deep snow between the rocks.  We did our best to follow the path when we could find it, but mostly it was just follow the compass.  Judging by the pains in my fingers as they defrosted I think I had a touch of frost nip in them.  The trouble is you just can’t operate a radio with thick winter gloves on your hands. The windchill was well down into double digits.

Back at the Gill crossing I was relieved to see that it hadn’t got any deeper and we were still able to cross safely.  We did pass another party somewhere around here walking up in street level anoraks?

From here is was now a pleasant walk back to the car, the rain had stopped and the sun was appearing.  A great end to another great day out in the mountains.  I wasn’t expecting much for this one, just doing it for the SOTA points, but never underestimate the ability of the mountains to surprise, in this case very much to our benefit.

Group – Myself, Peter and Richard 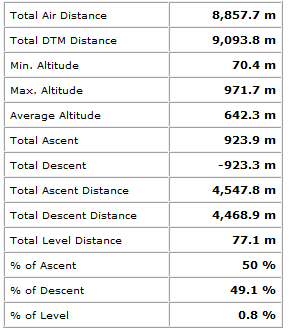