A forecast break in the Scottish weather coinciding with a rare free weekend afforded the perfect opportunity to bag two of the highest SOTA summits in the Kingdom and also a chance to tackle the impressive CMD arete.  I headed off up the motorway on the Friday morning looking forward to a weekend of adventure.  I was not disappointed.

There are two obvious option for this route, either starting at the North Face car park, or from the tourist car park in Glen Nevis.  The North Face start is probably a more pleasant walk in and perhaps a little easier, but as I was planning to activate two summits I couldn’t be sure how late I would be coming back down.  I chose the Glen Nevis start as it would be an easier return route in the dark.

I was first one down for breakfast on Saturday morning for the earliest possible start, it was not too far to the car park so I was on the hill by 8:30am. 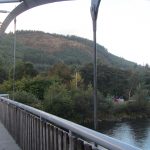 The initial trek up the tourist path was not as bad as I was expecting, it was busy but most people were very considerate and quite happy to move over and let me pass.  On reaching the junction at Lochan Meall an t-Suidhe I turned off the main path heading North. 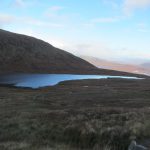 This path leads around the North side of the Ben below castle ridge and around to the CIC hut.  After the melee of the tourist path earlier the solitude was most welcome.  I passed one other walker doing the same route as me but the other way around. 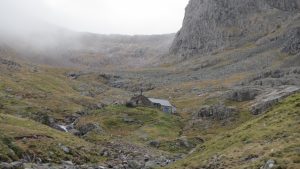 On reaching the hut there is a fairly easy river crossing to reach the slopes of Carn Dearg Meadhonach.  I had read some reports that indicated that there may be a path up here somewhere, but if there is then I didn’t find it.  The slope is steep but not too steep, it’s mostly loose rocky ground interspersed with grassy heather, so easy enough to pick a route up it if taken with care.

On reaching the summit of Carn Dearg Meadhonach (not a SOTA summit) I turned South for a welcome and mush easier traverse down and then up again  to Carn Mor Dearg.

Carn Mor Dearg summit was in the cloud when I arrived so not much to see.  I soon set up the station beside the summit cairn and called CQ SOTA.  I was soon rewarded with seven contacts including two summit-to-summit contacts.  The temperature at the summit was below freezing and although not excessively windy I would estimate the wind chill at around -15 deg judging by how cold my fingers were holding the mic. 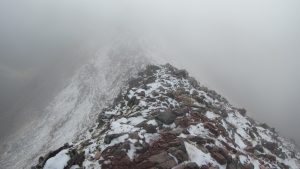 By the time I had packed up to leave the weather was starting to improve and I was able to catch a few glimpses of the CMD itself appearing from the mist.

I set off along the ridge, it deserves it’s reputation!  I was fortunate that there was not too much wind so I was able to stay on the very top almost all the way along.  At times it really does define what a ‘knife edge’ 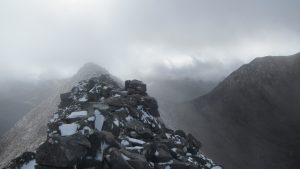 ridge should be.  The ridge proper extends for more than a kilometre until it reaches the SE slope of the Ben.  The end of the ridge is marked by a cairn which also marks the last escape route to the North down Coire Leis.  From here it is a relentless slog up to the summit of Ben Nevis itself.

There is a path shown on the map indicating the climb up Ben Nevis from the CMD.  Don’t believe it, the route is up a mighty great pile of loose rock, there is no clear path most of the way, just keep heading up until the slope eases off and you see the welcome sight of the summit structures appearing out of the mist.

It was not as busy as I expected at the top, I guess many of those who set out in the morning didn’t make it all the way up but still there were a fair few people around. I picked a spot away from the main structures and set up the station.  I soon had another seven contacts in the log. 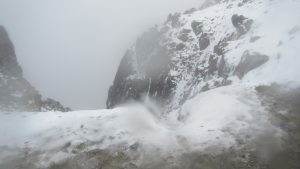 As I was packing away the wind started to pick up and the snow came down almost into blizzard conditions.  The route back from the summit to the zig zags is notorious in poor visibility as there are a couple of spots where the path passes very close to an almost vertical gully drop.  Every year the odd person disappears over this edge to their doom.  Fortunately the route was clear enough and the drop easily avoided.  Once onto the zig zags most of the drama is over, just follow the path back down to the car park.  As I descended the weather improved until by the bottom it was clear and sunny. 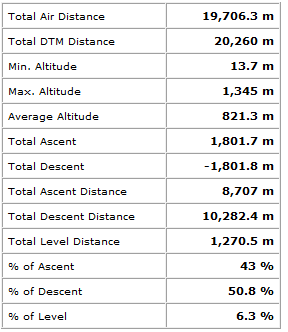