It had rained all through the night before and was still raining when we woke.  The forecast said it would rain all day, especially on the hills.  To say the outlook was not good would be a bit of an understatement. With this in mind I planned for a wet day.

The drive over to South Wales was grey but by now the rain had at least stopped.  As I headed north up the Abergavenny road the clouds descended until  the foothills lost their tops.  By the time I reached Abergavenny even the church steeple was lost to the cloud, but as I left the town behind the cloudbase started to rise again and slowly the black mountain emerged.

Arriving at the car park (SO 239 373) revealed a fine view of Hay Bluff with just a hint of low cloud hovering over the ridge and no sign of the promised rain.  The nearest postcode for the sat nav is HR3 5RJ but this is some way down the road to the South West so pay attention as you get nearer!

There is a path to the right of the car park.  It leaves the road about half way between the car park and the road junction.  This path should be used if possible to minimise erosion.

Once you reach the ridge turn north east towards the trig point marking the top of Hay Bluff.  It looks like this has recently been repainted and it now sports a very fetching red Welsh dragon.  The trig point is located at 677m so is just below the activation zone (AZ), don’t be tempted to set up here, it is an easy route from here into the AZ and well worth continuing.  The path along the ridge is obvious and has been made up as required to avoid having to trudge through the boggy top.  The path forms part of the ‘Offa’s Dyke Path’ which roughly follows the line of the English-Welsh border.

So far the weather gods had been kind to me with the bulk of the cloud remaining just above the summits, at one point I even had a few minutes of sunshine appear.  You will see an obvious rise ahead of about 40m which will take you well into the AZ.  Once you have climbed this last small rise you are within 1-2m height of the summit, anywhere along here choose a spot to set up.  In good weather this is a very well used path so do make sure you keep it clear.  The actual summit itself is not marked so to find the exact spot will require either a GPS or some advanced navigational skills.

I set up the station on the Welsh side of the path as I intended operating using my MW prefix.  If you set up on the other side of the path you should presumably operate without the Welsh prefix, but as the summit has a Welsh SOTA classification this could lead to confusion.  After a couple of calls of “CQ SOTA” on the calling channel I soon had the usual pileup.  Moving down to channel S19 I rapidly worked 12 QSOs in the space of about half an hour.

Whilst I was operating I didn’t see anyone else on the path, the poor weather forecast must have put people off.  By this time the cloud had descended below the summit level and visibility was down to less than 100m.  Before I packed the station away I stopped and had my lunch at which point I heard voices and a couple of walkers appeared out of the cloud.  They stopped to have a chat and were very interested to hear all about SOTA.

The return route is simple enough, back along the same route I came up on, as always pay attention and don’t miss the left fork just after the first small descent.

When I arrived back at the car there were a couple of ponies there that had decided to check the verges.  This explained the well kept look of the flatter section.

All together this was a great day out on the hills, much better than anticipated and so all the more enjoyable for the pleasant surprise.  Certainly a route I shall look forward to doing again when the points roll around once more. 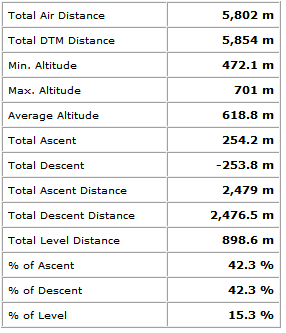