It was still dark on Sunday morning when I left home.  Three new summits today, none of which I have ever been up so a bit of a challenge.

Arriving at the viewpoint below Craig y Llyn at about 8:30 am I decided it was too public a spot to park up for the ascent so I continued on along the road to SN 923 027 where there is room for a couple of cars to park, in not such an obvious place.

The path marked on the map across Ffos Toncenglau is not there on the ground.  I tried to follow it but it was a big mistake.  The ground is boggy and covered in long coarse tufty undergrowth, the sort that is a nightmare to cross. 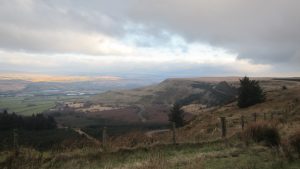 By the time I was half way across I decided to make for the northern boundary and pick up the track. Progress along the track was a lot easier although it is very badly rutted by motorbikes and off roaders.  The views over Llyn Fawr make up for the poor terrain though so don’t be put off.  Once on the track it is a straight forward route up to the summit with very little ascent.  The only challenge is knowing where to find the summit trig point which requires a bit of astute navigation. 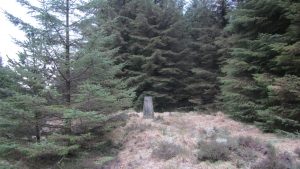 The actual trig point is set a little way back from the edge and is now surrounded by trees so I decided to set up the station back on the main track which had a clearer takeoff.

I soon had seven contacts in the log which cleared the pileup so as I still had two more unknown peaks to complete I decided not to wait around. On the return I checked the route across Ffos Toncenglau from the high ground above it and thought I could make out the path but when I got down to the corner where it meets the track it didn’t look any better so instead I returned along the track to the road and then along the road back to the car. A bit further but far far easier going. 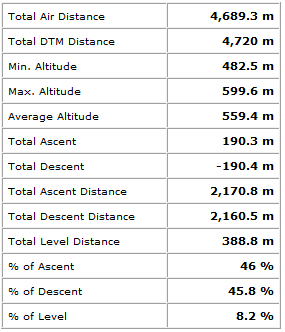 Mynydd Carn-y-cefn turned out to be a bit of a challenge navigationally. All the previous logs I have read seem to have approached this one from the North, generally starting from the West Monmouthshire Golf Course.  I decided that as I would be short of time I would try the shorter route in from the Blaina side.

Finding a parking spot was the first problem.  These are very narrow roads and it’s not clear exactly where to start walking from.  There is room for a couple of cars on the side of the road around SO 196 084 which is just below the radio tower.  From there I hunted around looking for a path up through to the hil.  There are a number marked on the map, eventually I found a way through at the southern end of the woods to the south of the radio tower.  Once through the woods it is an easy route up the hill until you reach the access land where it becomes quite steep at SO 192 081.

There is a stile on the right here which looks like it goes the wrong way but in fact leads to another stile and an easier route up the steep section of the hill.  In the event I went straight up the hill following the route of the path marked on the map.  This is a very steep grassy route which I would not attempt again, especially if it was wet.  Once on the top there is a clear track, badly cut up by off roar bikes a few of which were buzzing around whilst I was up there. 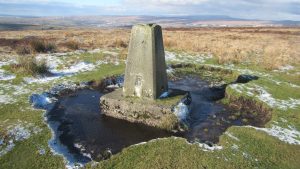 The trig point is not visible from the track so to find it I took a back bearing from the radio mast and walked along the track until I was on this bearing.  Then it is a short walk to the top and the trig point.

I set up the station at the trig point using the hole in the top to support the mast.  It was a fairly cold and windy activation with occasional flurries of snow in between the sunny spells. Again I made seven contacts to clear the pileup including three summit to summit entries.

The return back down to the car was much easier with the benefit of some height to observe the route.  The path down the steep section is much easier than the direct ascent and once onto the lower slope there is an easy route via a track to the North of the radio tower and woods then South back to the car.  Next time I will go up this way as well! 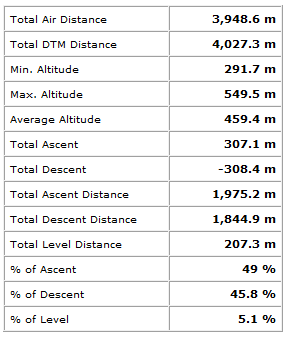 From GW/SW-014 it is a short drive to Cwmtyleri and the ascent of Coity Mountain.  At last, a summit name I can pronounce! Again I took an unusual approach to the hill.  Other logs I have read have started from the Eastern side of the mountain, generally from the Big Pit mining museum.  That is a shorter walk but a longer drive from the last one so swings and roundabouts. 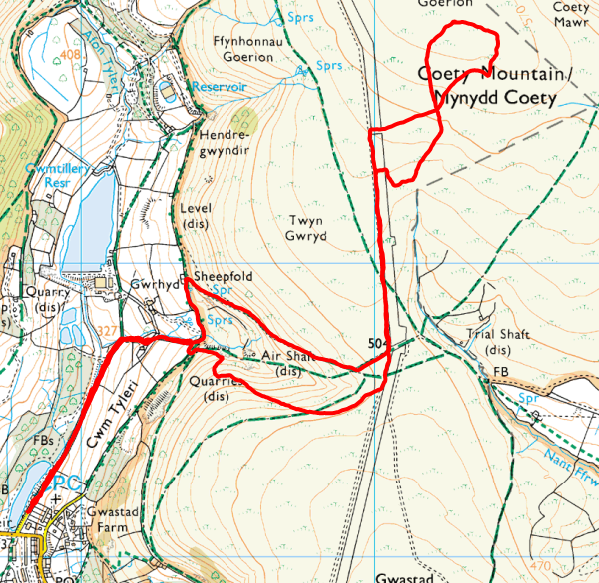 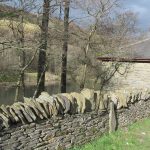 There is good parking at SO 218 061 which appears to be a visitor resource or there is room for a couple of cars at SO 220 066 if you want to save a bit of walking.

The track to the North and then South East up the other flank of the valley is a much better option.  From the crossing marked 504 on the map head North and then pick your spot to head into the wilderness looking for a summit.  I picked a spot at random that was showing as within 2 metres of the summit on the altimeter so very much within the activation zone.  I set up the station of the clearest bit of ground I could find, when I checked later I was about 180m from the marked summit on the map.  For the third time I made seven contacts to clear the pileup.

Returning to the car I stuck to the tracks which was much easier.  I was back at the car well before dark with three successful activations in the bag. 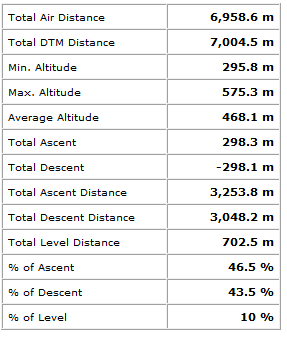