We spent the Easter weekend in Aberystwyth so I took the opportunity to log three of the local summits on Easter Saturday.  The weather had been bad but was forecast to improve during the day.  I planned to get dropped off to the West of the Nant-y-moch resevoir in the morning and to be picked up in the afternoon to the South on the A44 at Eisteddfa Fach layby taking in the three summits on the way.

As we left in the morning it was raining and as we climbed to the drop off point the rain turned to light snow.  From the road the tops were showing a light covering of snow already.  It looked like it would be an interesting day. 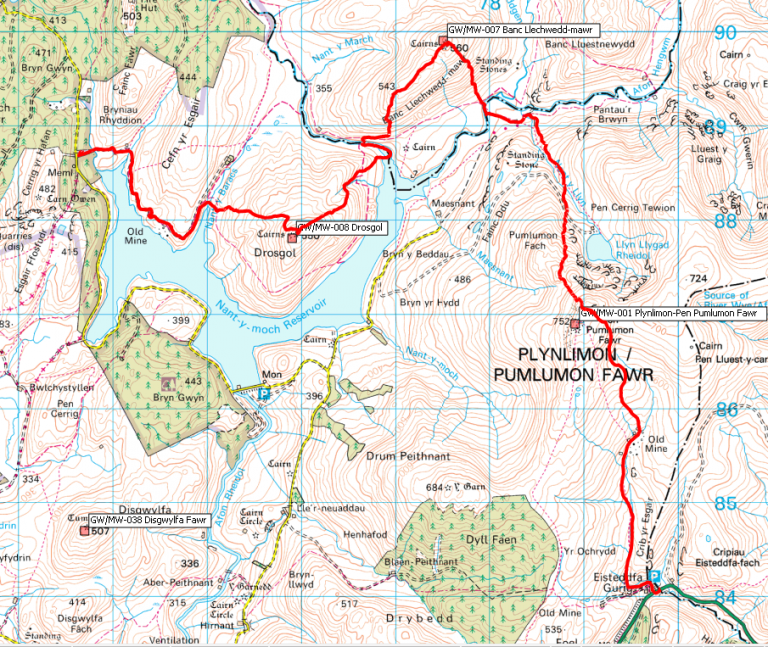 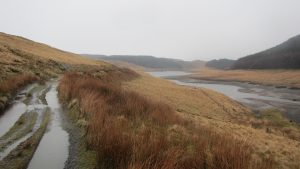 Leaving the road at SN 736 886 it was a wet start in light rain.  There is a clear track to the East and then South following the edge of the reservoir. The track was very wet, in places flooded to the point where it was necessary to walk on the banks alongside.

Reaching the third inlet at SN 749 881 it was time to leave the path and head up the hill.  There was no discernible track that I could find to the top.  It was just a case of setting a bearing and heading uphill.  At this point the top of Drosgol was still in cloud so I had to follow the compass. 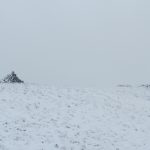 It is typical Welsh mountain landscape of rough grassy slope.  The snow line was at about 450m so the last 100m or so was in snow at about 4 – 6 inches deep.

At the top there is a large cairn and a shepherds shelter, either of which make a good support for the aerial.

As it wasn’t too windy I set up the station next to the cairn and proceeded to make a number of contacts.

I set the radio to record my QSO’s which is what I normally use as a log.  When I get home I listen to the recording and extract the log entries.  For some reason though the radio failed to record anything this time so I don’t have a proper log.  Fortunately I was able to recover enough entries from what other people logged to qualify the summit.  This is the log I managed to recover.

As I left the top of Drosgol the cloud started to lift which was nice as it meant I was able to appreciate the views a bit more.

To reach the next summit I would have to cross the river Afon Llechwedd-mawr.  This is a significant river for at least 4km upstream but fortunately I had read that there was now a bridge crossing near rge reservoir end, exactly where I needed it.  From the top of Drosgol I couldn’t see the bridge as the drop is somewhat concave and my eyes are not that good.  To avoid missing the bridge I aimed for the top of the estuary  when descending, planning then to walk upstream until I found the bridge or until I found a safe crossing.

As it turned out the bridge is exactly where you would expect to find it from the map, where the footpath meets the river at SN 766 888. 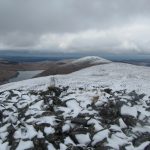 The climb up to the summit of Banc Llechwedd-mawr is more of the same slog.  There is no path or track that I could find and again the top was covered in snow.

At the top there is another cairn and shelter.  Again I set up the station and this time made quite a few contacts.  Unfortunately due to the logging issues, again I don’t have a full record of the contacts I made.  Unfortunately from this one I was only able to recover two confirmed contacts so although I am fairly sure this was the summit I made the most contacts from, it is also one I am unable to qualify at the moment.  If you read this and were someone I contacted from the summit I would appreciate you letting me know so I can add you to my log.

Once again there is a river crossing between this summit and the next over Afon Hengwm and Afon Hyddgen.  Without a bridge this would mean a 3km detour up river and another 3km back down the other side but luckily speaking to Allan GW4VPX from the summit he was familiar with the area and assured me the bridge was there at  SN 779 891.

With this knowledge I headed off down the hill on a bearing for the bridge.  Again the hillside is slightly convex so it is not possible to see the bridge from the top but it soon comes into view as you descend.

I stopped at the bridge for lunch and enjoyed the glorious views both up and downstream.

From the bridge there is at last a bit of a path for a while.This will take you up into an old field system at SN 784 890 but there the paths are a bit misleading.  I missed the path to the SW and instead ended up back by the river.  From here it is necessary to follow a bearing to find the route south towards Pumlumon Fach although after a while it is possible to follow the course of the river Nant y Llyn for a while.
At some point you will need to leave the river and find a route South up the flank of  Pumlumon Fach.  If you pick up the old track heading up to the lake you can follow this until it starts to lose height at which point it is back to the wild heath-land undergrowth. 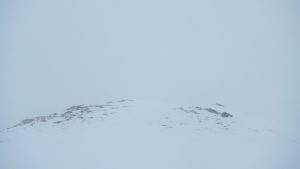 Keep heading South and uphill for another Km or so until you reach the top.  Above about 650m it was white out conditions so navigation was by compass and slope angle.

At the top there is a summit cairn and marked on the map is a trig point but if it’s there then I didn’t find it.  Visibility was down to about 20m on the day though!

Setting up the station for the third time that day, I soon made about ten contacts although once again the logging problem means I don’t have a full record.  I was able to collect enough entries though to qualify the summit fortunately.

I was hoping that the route back down from Plynlimon-Pen Pumlumon Fawr would be a bit easier but it was not to be.  There is a path marked on the map but I didn’t manage to find it due to the snow cover and the white out conditions, so I ended up once again forging a way down through the undergrowth. 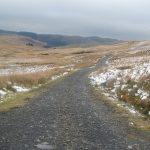 Eventually once I started to get out of the deeper snow I did manage to find the path and eventually picked up the track back down to the road.

I reached the car park about ten minutes ahead of my estimated arrival time which I was quite pleased about on such a long day and with the variables of operating times as well.  Fortunately Belinda had arrived at the car park 15 mins early so was there waiting there for me.  All in all a superb day out in the hills and apart from losing the logs a successful days SOTAing. 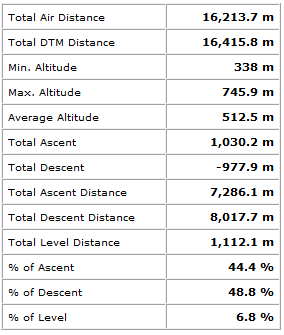