On Sunday 1st October I activated Fan Fawr.  I had been watching the weather forecast for the last week intently. At times it was looking fine and then the next forecast would be bad again.  On the night before I checked the BBC and the MWIS forecasts, one said rain in the morning then clearing, the other said starting clear then raining.  Looking at the synoptic charts for the next 24 hours didn’t help much either.  That’s British weather for you!

I decided to give it a go anyway, I have wet weather kit so should survive and my radio is IP54/55 rated, it was more of an issue for the external amplifier which is an old  MML 144/100, more suited to the desktop than to the mountain top.

In the event it was a nice enough morning as I drove West along the M4, if a bit overcast, but as I got deeper into South Wales the clouds got darker.  Once I passed Merthyr it started to rain and as I got higher into the Brecons the rain got heavier.

The Pen Y Fan lay by was absolutely full, with cars parked up and down both sides of the main road as well as in the lay-by.  If you want to climb Pen Y Fan on a wet day in October, make sure you arrive early.  Arriving at the Storey Arms car park just a few hundred yards further North, it was also packed full but I managed to find room to squeeze in between two minibuses.

Fan Fawr is a fairly nondescript slope, rising 150m from the car park in a gentle slope up to the Bryn Du plateau through typical Brecons moorland.  From Bryn Du the ground starts to rise more steeply as you approach the summit with a fairly steep section around the 650m mark.  Although there is no specific path all the way to the top, it is fairly easy to find in good weather so long as you have a rough idea which way to look. 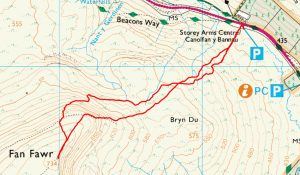 On my visit the weather was anything but good.  From the car park I could see the stile and a bit of grass beyond but not as far as Bryn Du and all the time it was getting worse.  This would be a bit more of a challenge.

Towards the top there is a reasonable path leading directly up the nose of Fan Fawr which can be found on a clear day, but in the gloom I managed to miss it by about 130m.  Not a problem though as the northern flank is easily ascended with a bit of care.  Knowing this I worked my way around and up towards the summit until I reached the flatter ground.  It was then a simple task to pick up the summit path and follow it to the summit cairn.

There is a trig point at the South Westerly end of the plateau and a cairn at the North Easterly end.  The cairn is the higher point (and the nearer to the road) so I set up here.  There were already a couple of people there with a tent so even in this weather I had company, they said they had been there since six am that morning and were manning a checkpoint for an iron man competition, more on this later.

I set up my station alongside a large bog just a few yards from the cairn.  From previous experience I knew there was a good chance I would be able to get into GB3TD, my local 70cm repeater back in Swindon, so I called in.  It turned out there were a few of the locals there waiting in anticipation to see if they could contact me on the summit.  They had been following my progress on the aprs.fi web site so had a good idea that I was at the top and almost ready to go.  Switching over to 2M simplex operation I put out a call of CQ SOTA on 145.500Mhz and was immediately swamped with replies.  I had soon logged Richard, G4MUF and then Rob G4XUT, both from my local club.   I logged another five contacts before I started to have problems being heard.

By this time I was soaked right through and getting cold.  I am still not sure what was wrong, I was hearing people clearly but no-one seemed to be able to hear me.  I tried a few things and eventually returned to 70cm FM on the whip antenna to contact the repeater and let them know that I was going to pack up.  At the time I thought that I must have got water in the amplifier, although subsequently this proved not to be the case.  Anyway, I had enough contacts to count as an activation so I packed up and headed back down the hill.

The path down the nose of the plateau is easy to find even in the poor visibility so getting off the top is not a problem.  Once down onto the edge of Bryn Du though it is classic ‘getting lost in the Brecons’ territory.  Flat featureless moorland bog in all directions as far as you can see, which was about 20m.  Some careful work with the map and compass soon finds the welcome sight of the Storey Arms lay-by appearing out of the mist.  If you are not very confident with a map and compass then I would not recommend trying this in anything less than clear visibility.

Those of you who were Sabbath fans when younger may recognise the quote.  Arriving back at the lay-by there was a tent there now and as I approached the stile I was greeted by an official who thought I was the first competitor down on the Iron Man competition.  I was quite pleased that he thought I looked like an Iron Man.

Back at home I tested everything but couldn’t find anything wrong, no sign of water in the amp and it was putting out about 50W into a dummy load running on the same batteries.  In the end I put it down to user error, perhaps I had knocked one of the switches on the front of the amp without noticing.  I worked out that a 2M amp doesn’t actually put out any signal when you drive it at 70cm so I think that when I swapped to 70cm on the hill that is what made me think the amp was not working, and in the cold and wet conditions I just didn’t follow a rigorous enough test procedure.  Probably a bit of hypothermia setting in as well 🙂 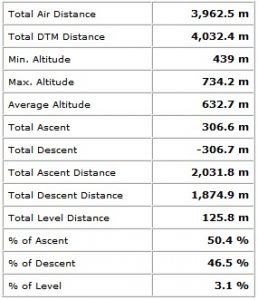