Another early start to arrive at the Storey Arms car park just after 9am.  Weather was forecast to start overcast but clearing later in the day.  Stood in the car park the cloudbase was at about 500m so no sign of the tops.  Planning to do both Fan Fawr & Pen Y Fan meant that I would be passing the car again between the two summits.  To save a bit of weight I decided to leave my lunch in the car!  Walking up to the Storey Arms then I set off up the fabled path to Fan Fawr, which if you’ve not been there before lasts for about ten metres.  Followed the old boundary wall marked on the map to the end, by which time the car park was lost in the mist.  It was going to be another compass challenge!  I decided this time I would aim off to the South towards the Bryn Du plateau then from there head South West to the main summit.  Having already worked both summits earlier in the year, this time was just for the winter bonus points. Aiming off is a technique where you deliberately aim to miss your target by a given amount to one side or the other.  The angle you aim off by needs to be greater then the anticipated error in your navigation.  The technique relies on what is called a catching feature along your planned path which is a prominent line feature roughly at right angles to your course.  Once you reach the catching feature you know where you are plus or minus your expected error but the important thing is you can be confident which direction to turn along the line feature to reach your desired target.  In this case my catching feature was the main slope of Fan Fawr, fairly obvious once the ground starts to rise sharply even in the poor visability. My target was the path up the nose of the slope.  The reason I aimed South was that to the North is a fairly large flattish area without any obvious distinguishing features visible in the low cloud so no catching feature there.

Once I reached the main slope I could be fairly confident that I needed to turn right and head North until I found the path up, but it would be nice to have a better idea of just how far to the South of the path I was.  To check this I used a technique called aspect of slope.  This technique works best when you are on a slope that curves away or towards you.  In the case of Fan Fawr the approach I was on is the end of a prominent ridge so has slopes on three sides. A perfect example.  By taking a bearing directly up the slope from where you are stood you can transfer this to the map and find the point where the bearing is at right angles to the slope contour lines.  This will give you your position on the curve.  My bearing of 305 degrees put me on the straight bit of slope to the South of the main curve of the nose.  Turning right and heading North across the slope I soon found the main path up to the summit.

Once on the path it is an easy trek up to the summit cairn.  Anywhere along the top is within the activation zone, I chose a spot just past the cairn and set up my station.  I quickly made the required four contacts and continued until the pile up was cleared to complete eighteen contacts.

The return to the car park is straightforward.  Follow the path back down the main slope and then once this disappears use your compass. Once you get closer the noise from the road is a giveaway.  The road is of course a marvellous catching feature so if not sure you can just aim off until you reach the road. 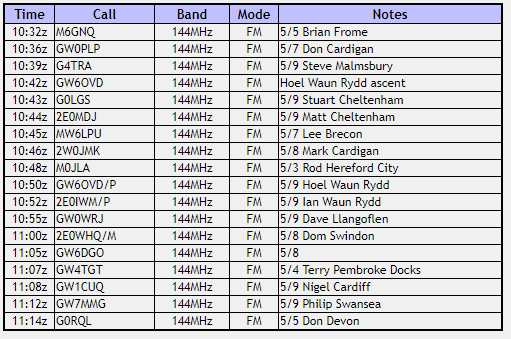 Back at the car park and a quick lunch.  By this time the car park was as usual absolutely full, with cars cruising up and down looking at me hopefully in case I was about to leave.  The path up to Pen Y Fan was busy on the lower sections but more tolerable as I neared the saddle.  As usual, I took the detour via Corn Du summit, although there was nothing to see beyond a few tens of yards due to the thick cloud still sitting on the tops.  Crossing over to Pen Y Fan summit, there was, as there often is, a group activity of some sort so the main path was full of runners with numbers attached passing to and from the summit.

At the summit itself they had a checkpoint operating and I could hear the unmistakable crackle of radios, hopefully my station wouldn’t interfere with them.  I set up a reasonable distance away and soon made twelve contacts. 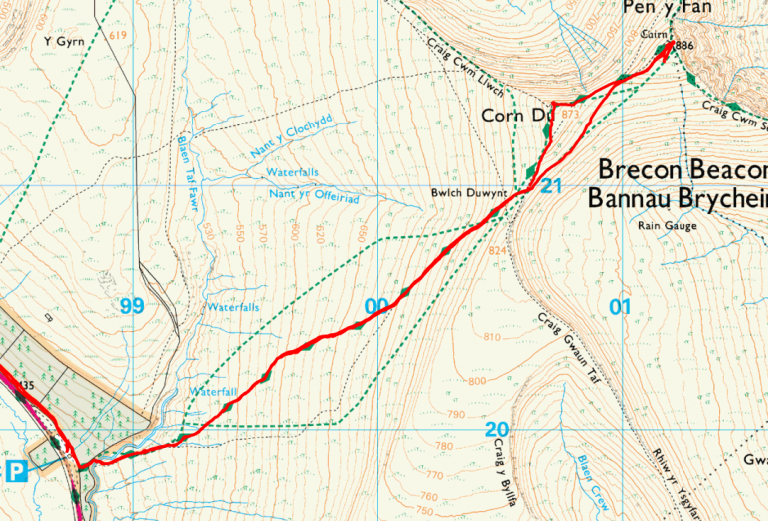 The summit was busy as usual and I was approached by a couple of people interested in what I was doing so I took some time to explain what SOTA was all about before packing away and heading back to the car. 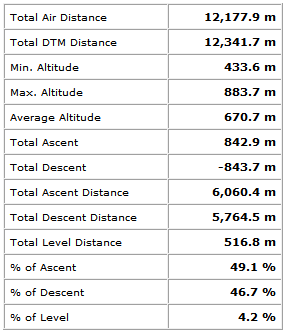