Another early start aiming to collect two of the lower summits today but with the winter bonus on each they should be worth 12 points between them.

The weather forecast was a bit mixed, it would be warm at least.  The sky was overcast until after I crossed the bridge into Wales whereupon it started to clear as the sun rose.

The climb up Mynydd Troed starts easily enough, the path is very muddy and slippery until you get beyond the range of the dog walkers.  Once you get nearer the top it gets very steep.  There are steps cut into the mud but in wetter weather these are better ignored.  Once you get up to about 530m there is a much easier path which winds it’s way up to the summit plateau. 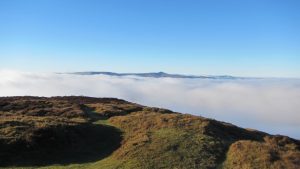 Slowly the clouds dropped into the valley and the summits cleared. I was rewarded with one of those moments that make all the hard work worth it. Stood on the top I thought I would put in a call via GB3TD my local repeater back in Swindon.

I immediately picked up Richard, G4MUF, and whilst discussing the unusual weather he reminded me of a phenomenon called a brocken spectre which is where your shadow onto the top of the cloud shows a coloured halo.  This is my photo showing it.  It’s a bit weak as by this time I had missed the best of the sunlight, it did look more obvious in real life. 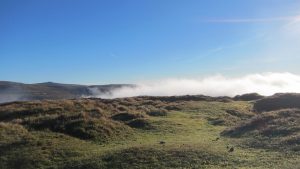 The return back to tha car park is straightforward.  The climb back down the steep turf was not a problem so long as a little care is taken. 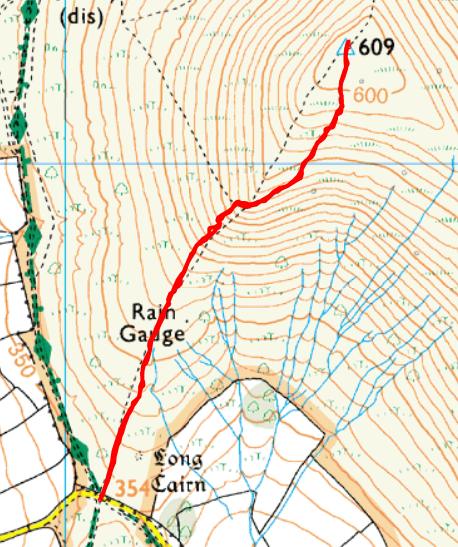 Back at the car park for an early lunch and then off up the southerly path to the top of Mynydd Llangorse.  This is a very clear and easy route with no dramas on the way.  The cloud had settled once again so not much of a view. Once at the top of the main climb it is a short walk along the level ridge to reach the high point at 515m.

Anywhere along the ridge is in the activation zone but near the highest point there is a large cairn which gives an extra metre of height for the aerial.  There is a trig point further along but as this is at a lower height I didn’t go that far.

Compared to the earlier summit this one was clearly more of a challenge to get a signal out.  I only manged to make five contacts and most of these reported a poor signal.

The path back down is straightforward.