Planning started for the Snowdon horseshoe route a while before we left.  A winter ascent of the highest mountain in Wales is not to be taken lightly and with the added weight and time required for a SOTA activation then preparation would be crucial.

We had decided to try and complete the classic Snowden horseshoe walk, starting at the Pen-Y-Pass car park, up via the Pyg Track and possibly Crib Goch ridge, onto the top end of the Llanberis path up to Snowdon summit for lunch and the first activation.  From Snowdon descending to the South West and then up to the summit of Y Lliwedd for our second activation before finally descending back to the lakes and returning via the Miners Path to Pen-Y-Pass car park. 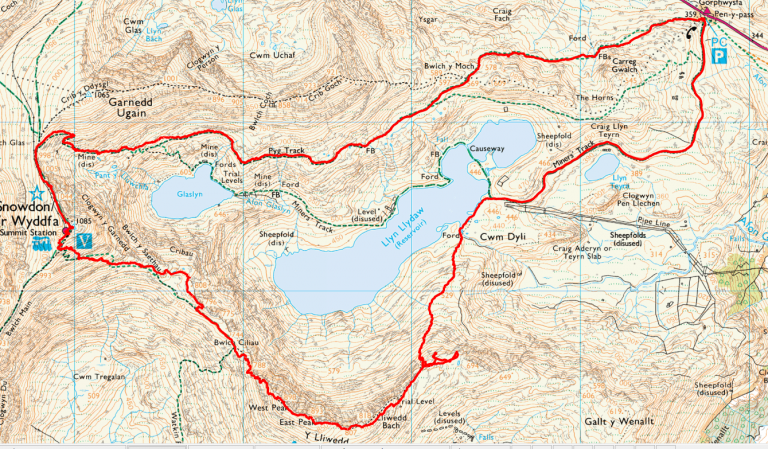 Weather would be crucial to the planning.  Monitoring the MWIS weather reports in the days before seemed to indicate that the weather gods would be kind to us but the winds may be a bit high.  Another good source of information is the from the Snowdon wardens reports giving a good indication of conditions on the higher slopes.

What kit we would carry was another major consideration.  Safety has to come first of course but with the addition of the radio equipment on top of full winter kit it was not going to be a lightweight expedition.  We had to carry ice axes and crampons each, that much was obvious.  Because we were going into less well travelled parts we decided to carry a climbing rope, a decision which turned out to be a good one, see later.  Due to the expected length of the day we needed torches and spare batteries plus lunch and enough fluids for the day plus the usual spare maps and clothing.  All in all a fairly hefty pack, all up weight about thirty Lbs.

Due to the distance we needed to travel and the time we expected to be out on the hill it was clear we couldn’t manage it in a day so we booked a hotel in Bets-Y-Coed for the night before.

The Pont Y Pair inn is reasonably priced, we paid £62 for two of us including breakfast.  The staff are friendly and helpful and they have a reasonable restaurant for an evening meal when you arrive.

A final check of the weather forecast the night before showed that wind was definitely going to be an issue, Crib Goch was off the list. 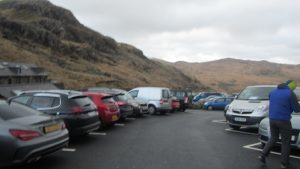 Arriving at the car park just after 8:30am it was already fairly full. By the time we had kitted up and were leaving the car park there were no places left.  Even with the adverse weather forecast it was as popular as ever.  Note also it is not cheap, we paid £10.00 for an all day ticket.

The wind in the car park was very gusty which confirmed our decision to skip Crib Goch.  As the wind was from the West we would be in the lee of the mountain most of the way up so we decided to defer a decision on completing the full horseshoe route until we reached the Llanberis path when we would feel the full force of the weather as it was.  There was a sign up in the car park quoting weather conditions of up to 60mph winds on top!

The path up towards Crib Goch was busy as usual with a good mix of tourists and one of two, more seriously equipped walkers.  As we gained altitude and moved further into the lee of the mountain the wind dropped steadily and the walking became very pleasant.

Reaching the junction with the Crib Goch path we paused to a moment to enjoy the views and wait for the queue to subside at the stile.

Continuing along the Pyg Track, slowly gaining height, the walking was good and the snow cover was slowly increasing.  At about 800m there was more snow than rock on the path so we stopped and put on the crampons although there were still plenty of people passing in wholly inadequate footwear and some in normal street clothing.

Reaching the Llanberis path we were pleasantly surprised at the weather.  It was certainly windy but nothing like the promised 50-60mph gusts we were expecting.  Perhaps gusting to 30mph max. with fairly calm conditions between the gusts.

Reaching the summit, it was the usual queue to get onto the small summit cairn. Visibility was very poor at the top as we were now into the clouds.  We had been looking out for the top all the way up but it had persistently stayed in the clouds all day and was in fact to remain in the clouds until after dark.  The photo here shows how misty it was, this was taken stood at the base of the cairn, perhaps ten or twelve feet away.

I had already started to hear people on the radio before we reached the summit so rather than setting up the aerial amongst the crowds I put out a call of “CQ SOTA” and almost immediately heard Vicky mw6bwa also calling cq sota from the summit of GW/NW-075.  We quickly made a S2S contact followed by a second on 70cms.  It didn’t take me very long to gain the other three contacts required for a successful activation.

Stood at the summit, although the day was remarkably warm for the time of year,  it was fairly cold in the wind.  One of the tourists took pity on Peter who was stood waiting and tried to feed him a hard boiled egg!  Once I had the activation we made our way down to the summit station and found some shelter beneath the wall there to take lunch al fresco.

The wind on the way up the Llanberis path had not been as bad as expected so after a quick chat we decided to press on and complete the horseshoe as planned.  Leaving the summit station via the Watkins path the route is very obvious but to complete the horseshoe you need to turn left off the main path a couple of hundred metres below the station.  This is a fairly steep and rocky path down into Bwlch y Saethau.  I have been down there a few times now and never yet found a good clear route, it was no different this time. 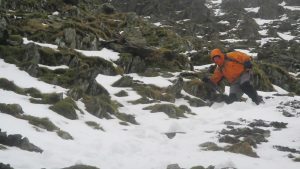 Looking at our track log clearly we found the start of the path but soon lost it and ended up clambering down over rocks until we could pick it up again lower down.  All great fun.

We took second lunch in the Bwlch keeping a wary eye out for sleeping soldiers.  There was a lone walker there when we arrived but he soon left muttering something about needing a new table. 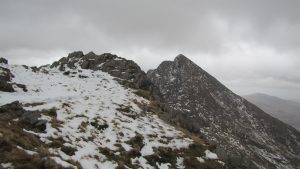 From the Bwlch the ascent of Y Lliwedd looks intimidating but as always, as you get higher a route invariably appears.  There are two peaks with the West peak being slightly higher at 898 metres whilst the East peak is a mere 893 metres.  Due to some confusion in reading the map we chose the East peak to operate from but no matter as it was still well within the activation zone.  I soon made the four contacts needed, again just using the Ngoya antenna on top of the Kenwood.  At this point I started to regret carrying the weight of the batteries and amplifier.

As we left the summit it was starting to get dark.  It had taken us a bit longer than we had hoped for but we had torches and had always expected to finish the last section in the dark.  By this time both of us were out of water and so were keen to get back to the car where we had fresh provisions.

Once we got down to the levels at around 700m we managed to miss the steep path down to the lakes and spent a bit of time wandering around before we managed to locate it.  What is a fairly straightforward descent in the daylight became a bit of a navigational challenge in the dark.  We lost the path repeatedly and ended up roping down over a steep rock slab that was covered in verglas.  Thankfully we had brought the rope or we would have had to climb back up from that point.  Roping up cost us a lot of time and underlined the need to carry the proper equipment and to know how to use it when out in the hills in winter.

The final section was arduous but uneventful.  By this time we had been out eleven hours, the feet were hurting and the back aching from carrying the weight, but the final path down the Minors Track is very easy even in the dark.  We were certainly glad to reach the car park even though we still had a five hour drive ahead of us to reach home. 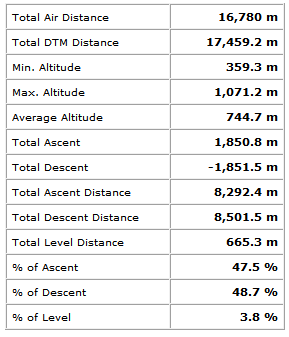