1st Dec and it’s winter bonus season again.  Decided to head up the A5 to North Wales for a weekend in Snowdonia.  Weather was at least not cold but forecast wet and windy.  It didn’t disappoint. 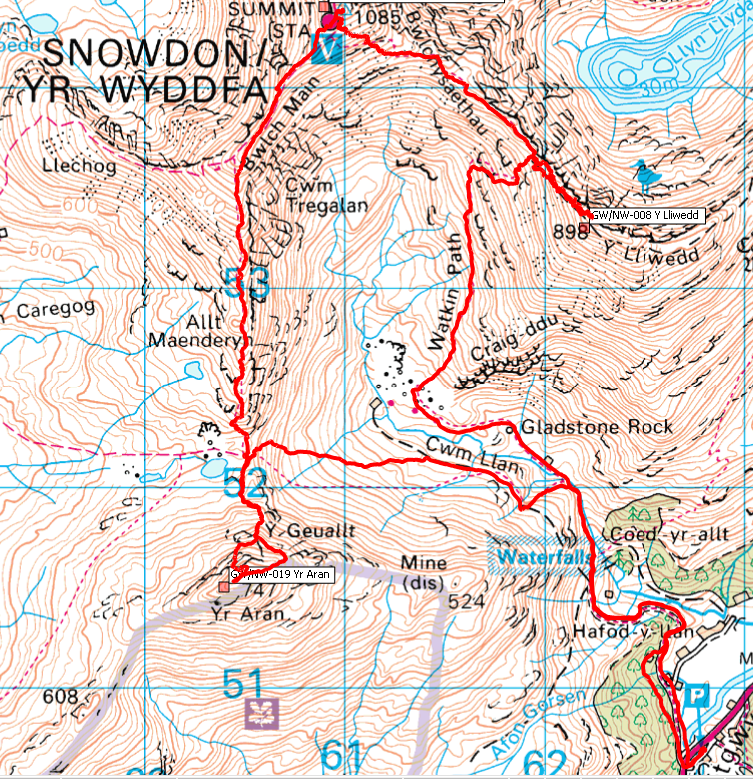 Last year we did Snowdon from the east up the Pyg track so this year we decided to try the southern approach via Watkins.  This gave us the opportunity to add Yr Aran on the return leg. 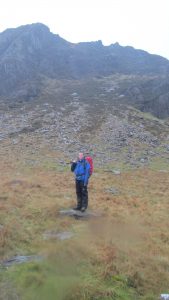 First summit of the day was Y Lliwedd.  This was the first time I have used the Watkins path, I wasn’t disappointed.  Viability was not great but still it was a pleasant approach.  Compared with the other Snowdon routes this one was quite quiet.  We saw one large party set off just before us but we soon passed them and had the mountain to ourselves.

We stopped for a moment at Gladstones rock to reflect a little on the history of this route.  At least I think it was this one, there are a lot of rocks on this path.

The final push up to the summit of Y Lliwedd is always an interesting climb.  The path is a bit like the mountain mists!  There are two summit peaks, east and west, both are in the activation zone so either will do.  This year we operated from the slightly higher West Peak as we would be turning around to head back up to Snowdon once finished.  As we approached the summit we could hear people on the calling channel so didn’t set up the beam but managed to work enough contacts using the Nagoya whip. 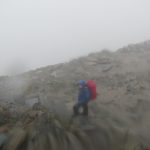 From Y Lliwedd we dropped back down to the Bwlch to pick up the top end of the Watkins again and continue up onto the main summit.  I have walked this route a few times in the other direction and always struggled to find the correct route.  This was the first time I had walked it in this directions so I had high hopes that I might be able to find the proper path up.  It was not to be though, we turned up too soon and ended up emerging right by the upper station building much to our surprise. 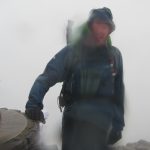 The summit was busy as always although we did manage to get on top of the cairn briefly for a photo.  It was pretty windy by this time but we found shelter below the cairn to activate the summit.  Again we could hear people on S20 so worked directly through the whip antenna.  We made eleven contacts before stopping to enjoy lunch before setting off down towards Yr Aran

From Snowdon summit we headed southwest down to Bwlch Main.  This is a superb ridge walk which makes a fitting exit from the lofty height of Yr Wyddfa.  At Bwlch Cwm Llan the main path turns left heading back towards the Watkins but we pressed on south towards Yr Aran summit.  There is a path of sorts following the line of the wall.  As nothing is marked on the map we turned right at the 90 degree bend in the wall and headed cross country on a bearing for the summit.  This is quite a difficult and steep route in the wet and windy conditions, not to be recommended.  Instead follow the wall along to the boundary and there is a path up to the summit from there.

We reached the top with less than an hour of daylight remaining so tried once more to quickly activate the summit from the whip but despite calling repeatedly could hear no one.  With the light fading fast we decided to set up the beam in a desperate attempt to get the points before it was too dark to descend.  At this point we didn’t know there was a usable path back down and had visions of either trying to descend the route we came up or spending the night on the summit, neither particularly appealing options.

With the beam up we at last managed to make about six contacts. Unfortunately we had logging issues and lost the details of the first few contacts we made so if I missed you then sorry, please let me know and I will add you to my log.

Leaving the summit of Yr Aran the light was fading fast so we followed the only path down we could see as we didn’t want to try descending the route we came up by.   The original plan had been to exit to the east following the high ground as far as possible before descending back down to the Watkins somewhere around the old incline, but without any path marked on the map attempting this in the dark did not seem like such a good option.  Instead we opted to retrace our route back down the northern path and onto the main valley route east.  Quite a bit longer but much safer. 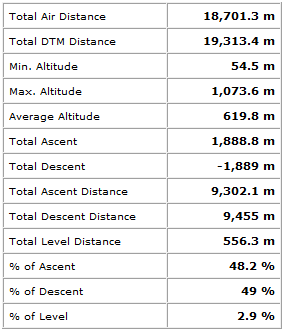