With the end of the winter bonus season rapidly approaching we decided to fit in one more high scoring session this time to the Lake District.  The plan for the Saturday was the three peaks of Great Gable, Kirk Fell and Pillar.  A fairly ambitious target which I failed to complete all in one go in 2018, so a personal challenge to overcome this year. 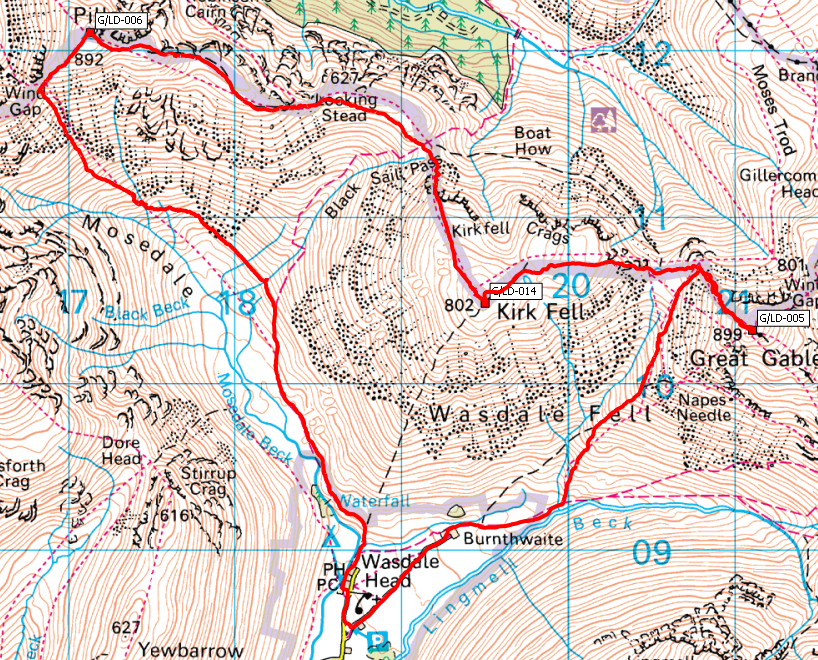 We were the first car to arrive in the car park at Wasdale head, as we were kitting up another car arrived and parked beside us, shortly followed by a third.  The driver of the third car wound down his window and asked us where Scafell Pike was.  After putting him right and pointing him back to the NT car park the occupants of the second car admitted that they were also planning Scafell Pike.  They were soon packed back into their car and heading off the same way.  One has to wonder sometimes.

The last time I attempted this route I went around clockwise, I was defeated by the weather that time and had to descend via the Blacksail path, only completing the activation of Pillar that day.  As the weather was forecast similar again with winds gusting up to 60mph we decided to try from the other direction this time as we were more likely to complete the first two summits that way rather than just the single but more difficult Pillar.

From Wasdale Head we took the easy path East alongside Lingmell Beck before turning North East to pass up beside White Napes and up onto  the col marked Beck Head on the map.  From here the path South East up to the summit of Great Gable is patchy at best.  Generally it is just a case of picking the best route over the rocks until reaching the summit plateau.  Conditions on the top were severe so we did our best to find shelter in amongst the few rocks marking the summit where we set up our stations.

There were quite a few operators around so to save time and batteries we all three worked the first four to qualify and then I continued to work the pile up whilst the others packed away their radios and did their best to keep warm.  I worked ten stations including a summit to summit with G4YTD Tim and an M6 from Northern Ireland MI6LNP Norman.  Although I know it’s not really that far away it always seems a bit exotic to work someone on another island on VHF.

The return back down to the col was soon accomplished thanks to a clearing of the clouds which makes navigation so much easier.  There was quite a bit of fresh snow cover on the ground from overnight but as it hadn’t yet had time to consolidate it made the decent easier in some ways by filling many of the cracks and gaps between the rocks.

Once back down at Beck Head we stopped briefly for some lunch before heading over past the tarn and beginning the Eastern ascent of Kirk Fell.

The path from Beck Head up to Kirk Fell was barely discernible under the snow cover, but fortunately the weather remained clear for the ascent so we enjoyed some fabulous views back over the Gables.

The top of Kirk Fell is fairly flat and when approaching from the East has a false summit at 787m.  Although this is within the activation zone it is only a couple of hundred metres beyond to reach the true summit and the trig point so persevere.  We soon set up our stations in the small summit shelter and set about the pileup.  As previously we all worked the first four contacts but this time Richard completed the operation so I only logged six contacts, including another summit to summit, this time with Allan GW4VPX/P down in Mid Wales.  It was a real challenge as he was barely audible but after much perseverance I finally completed the contact.  Thank you Allan

With time and daylight still in hand and some reserve still in the energy banks we decided we would descend into Blacksail Pass and go for our third activation of the day on Pillar.  This was an unknown route as I had never done it previously, what a pearl it turned out to be.  The route off Kirk Fell is easy to spot as the old boundary fence posts are still there to mark it, although the fence itself has long ago rusted away.  Once you reach the edge of the plateau there is a steep rocky scramble down over Kirkfell Crags and into Blacksail pass.  A great opportunity to get some hands on the rocks.  I am not sure if this is officially rated but I personally would class this as a short grade one winter scramble so wouldn’t recommend it unless you are comfortable with winter scrambling and have the correct gear.

From Blacksail it is an entertaining route up onto Pillar.  Hard work after a long day but with a nice mix of steep rock and flatter grass sections, albeit a bit drawn out.

By the time we reached the top we were certainly ready for a break.

The summit shelter was full of snow when we arrived so we set to digging it out and soon had a cosy(ish) home from home in which to set up our stations.

Same procedure once again, all working the first four then it was M6XPE’s turn to work the pile up but by now he was struggling a bit with his radio and not a lot of battery remaining so I took over and worked the pile up for him making another thirteen contacts, including another two MI stations.  Magic stuff. 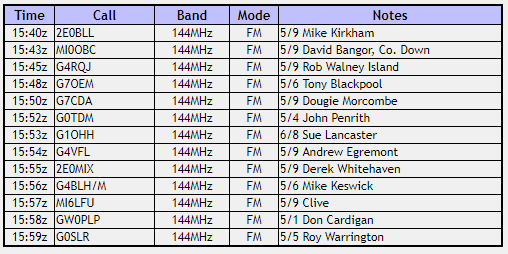 By the time we were ready to leave the summit the weather had closed in almost to the point of a white out.  It is unusual to see it quite that bad here in the Lakes, it was more like a Scottish winter day than the good old friendly Lake District 🙂

We descended down the ridge line into Wind Gap which was an exciting experience.  As we reached the col we dropped below the cloud  to reveal the full majesty of the Mosedale valley.

Descending the scree slope below Wind Gap we spotted a couple of walkers below us who had followed the path down to the bottom and were now trapped in the junction between Mosedale Beck and Gatherstone Beck.  This provided great entertainment as we watched them trying to find a way out of the trap.  In the end they took the plunge and got their feet wet.  Learning from their experience we instead contoured around the valley crossing Gatherstone Beck higher up the valley side.  Even so it was still not easy to cross, there had been a lot of rain in the preceding week.  We finally reached the car back at Wasdale head just as the sun was setting, a great end to a great and successful day out SOTAing.

Group – Myself, Peter and Richard 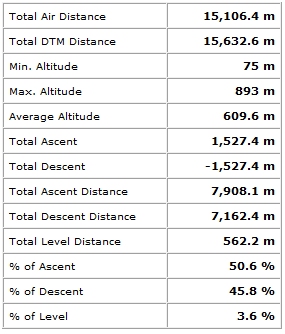